Television actress, Shraddha Arya is known for the role of ‘Preeta’ in the show, Kundali Bhagya, and people love her stint on the show. While the actress has been riding high on the professional front, her personal life is also nothing short of a fairytale. Shraddha had tied the knot with her boyfriend, Rahul Nagal, on November 16, 2021, and ever since then, she is living her happily-ever-after with him.

Rakshabandhan 2022 marked Shraddha Arya’s first Rakhi after her wedding, and she celebrated the festival at her new house. For the unversed, while the actress was busy shooting for her show, her interior designer conned her and took all the electrical appliances and other things from her then-underconstruction house. The incident left Shraddha in utter shock, but without giving up, she stood strong and started from scratch.

On August 12, 2022, Shraddha Arya took to her IG handle and shared some beautiful glimpses of her new house. In the pictures, the actress looked gorgeous in a sky blue coloured suit and styled it with a matching dupatta. Shraddha can be seen striking cutesy poses for the lens as she flaunted the wooden nameplate of her house. The beautiful nameplate had ‘Shraddha Arya’ written on it. Moreover, the floral decor below the nameplate added more charm to the overall area. 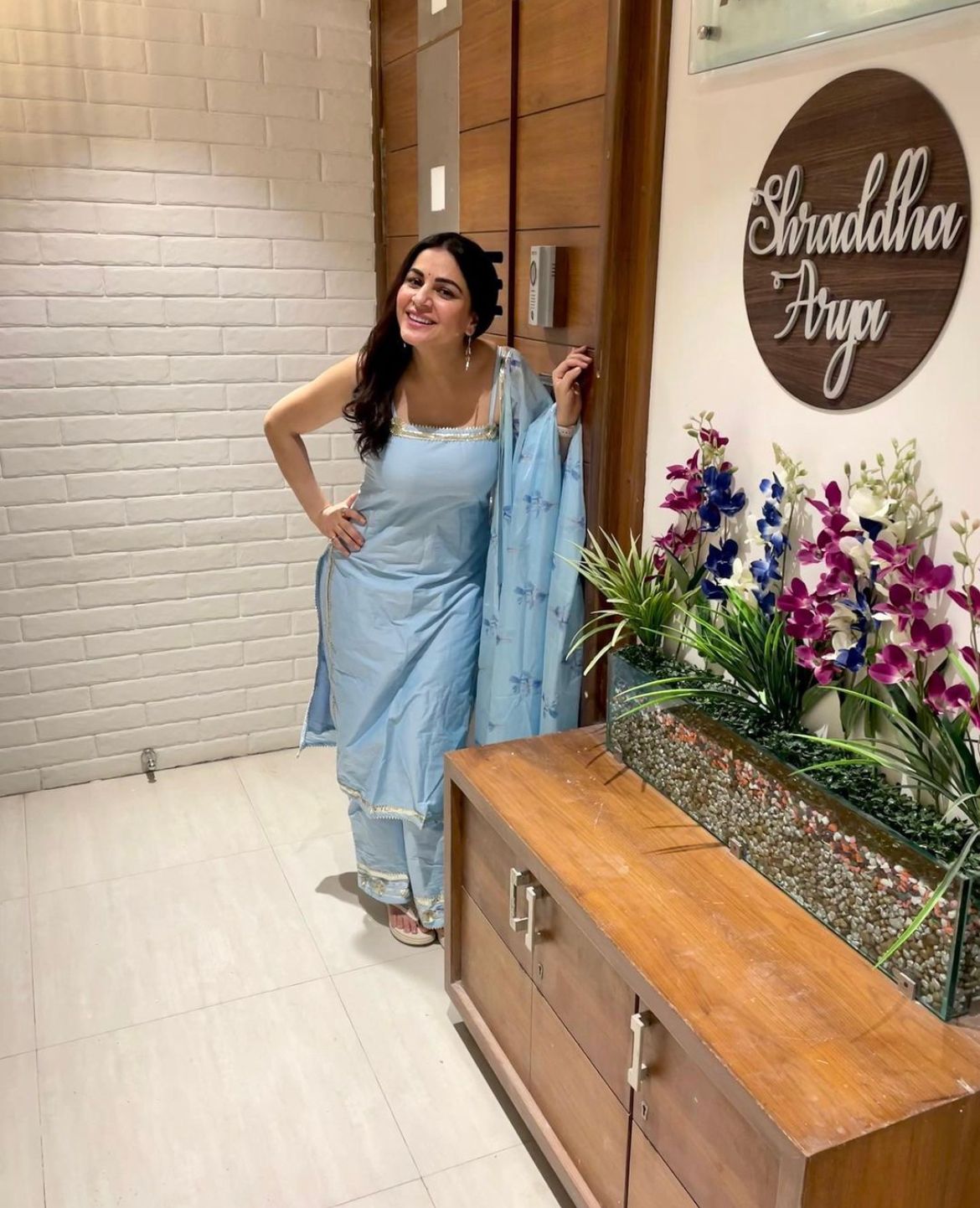 In another picture, Shraddha Arya gave a sneak peek into another corner of her house, and it was too beautiful. The area featured pristine white walls, which had a wall lamp and two unique flower vases hanging on it. Moreover, the grey-hued tiles and the glass door perfectly complemented the overall aesthetic of the area. Sharing the pictures, Shraddha penned: Earlier, in an interview with The Times Of India, Shraddha Arya had opened up on the details of the robbery at her house. She had revealed that she had hired the interior designer for her new home, and he had promised to complete the work in four months, but it took him longer. She had also revealed that he had quoted the amount in lakhs and she had paid him around 95% of that. However, he had run away with her money as well as all the material that she had bought for the house when she had gone to Vishakhapatnam to spend the weekend with her hubby, Rahul.

We can’t wait for Shraddha Arya to give us a complete house tour! What about you? Let us know.

Next Read: Sidharth Malhotra Reveals How He Forced Kiara Advani To Cheat On Her Diet And Eat ‘Ghee Wala Khana’

Zayed Khan Posts An Adorable Post For Wife, Malaika On Her B’day, Duo Twins In Blue With Their Sons

Nisha Rawal’s Brother, Rohit Satia Reveals Karan Mehra Has A Girl In His Life, Her Initials Are ‘MM’