The Kapoors are known for their lavish celebration and get-togethers. For the unversed, Raj Kapoor’s three sons, Randhir Kapoor, Rishi Kapoor and Rajiv Kapoor’s family members share an unbreakable bond with each other and never miss a chance to celebrate each festival altogether. Thus, to celebrate the festival of Raksha Bandhan today, on August 11, 2022, the family have come together in Randhir Kapoor’s house, and we got hold of some of the cutesy glimpses from the same.

A few hours ago, late Rishi Kapoor and his wife, Neetu Kapoor’s daughter, Riddhima Kapoor took to her IG stories and shared a series of pictures from their intimate celebration. The pictures featured Kareena Kapoor Khan, her parents, Randhir Kapoor and Babita Kapoor along with Reema Jain, Adar Jain, Neetu Kapoor, and Natasha Nanda, among others.

However, it was Kareena Kapoor Khan’s look for the event which caught our attention. For the intimate celebration, she donned a mint-green-coloured kurta set which featured a silk kurta adorned with lace borders, matching pants and an organza dupatta. She teamed her look with dewy makeup along with a black bindi, oxidised jhumkas and matching jootis. Upon doing some research, we found Kareena’s kurta set is from the brand, Begum Pret, and it is priced at Rs. 22,800. Check it out:

On April 20, 2022, veteran actress, Babita Kapoor had turned 75 years old, and her daughters had arranged an intimate get-together at their father, Randhir Kapoor’s house. At the house’s entrance, Kareena was spotted with her younger son, Jehangir Ali Khan, Karisma with her daughter, Samaira Kapoor, Neetu Kapoor, and Reema Jain. Kareena’s hubby, Saif Ali Khan, was also spotted entering the celebration. Karisma had also shared a glimpse of her mother, Babita Kapoor’s birthday cake on her IG stories. We can also see some delicious food placed on the dining table behind the cake, which featured the number ’75’ and ‘Mom We Love You Happy Birthday’ written atop it. Check it out below: 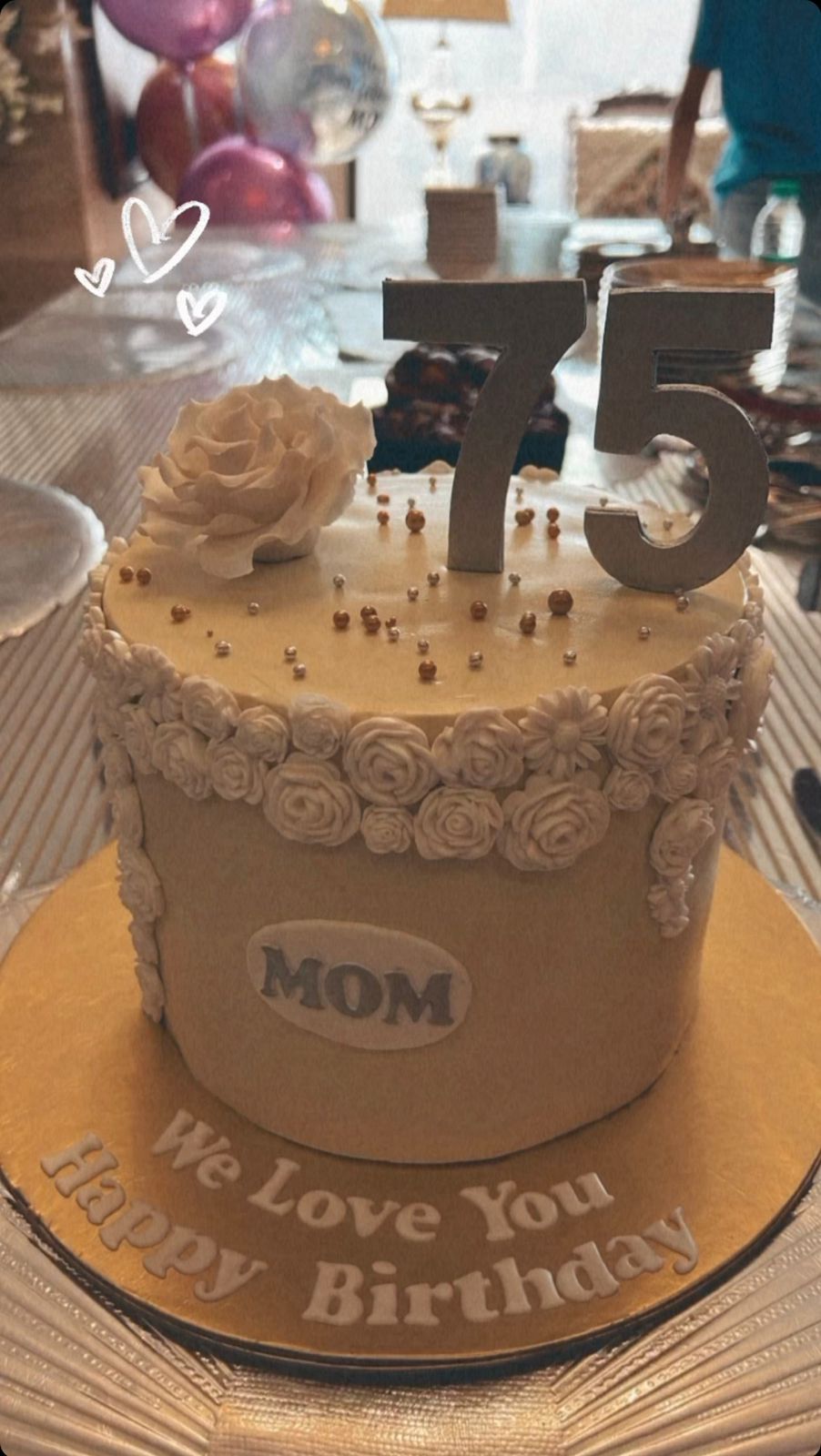 On the other hand, Neetu Kapoor had also shared a selfie from the birthday party on her IG story. It featured the gorgeous ladies of the Kapoor family happily posing for the lens, and simply spoke volumes about their bond. The priceless picture showed Karisma Kapoor, Kareena Kapoor Khan, Reema Jain, Neetu Kapoor and Natasha Nanda, posing for a selfie. Sharing the happy picture, atop it, Neetu had written:

“Birthday celebrations of our Babita Kapoor.” 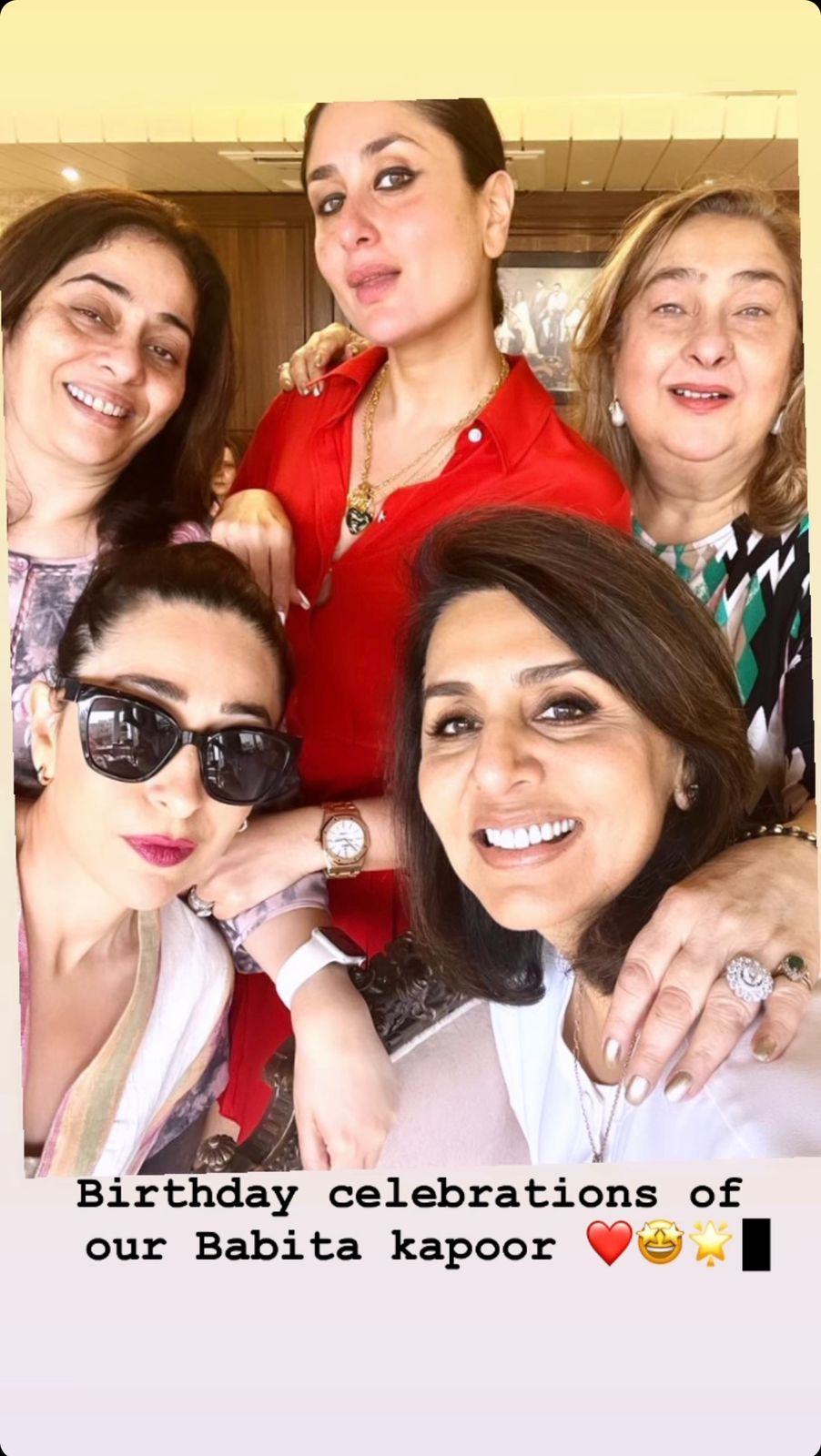 Well, we are excited to have a look at some more glimpses from the Kapoor’s Raksha Bandhan celebration!